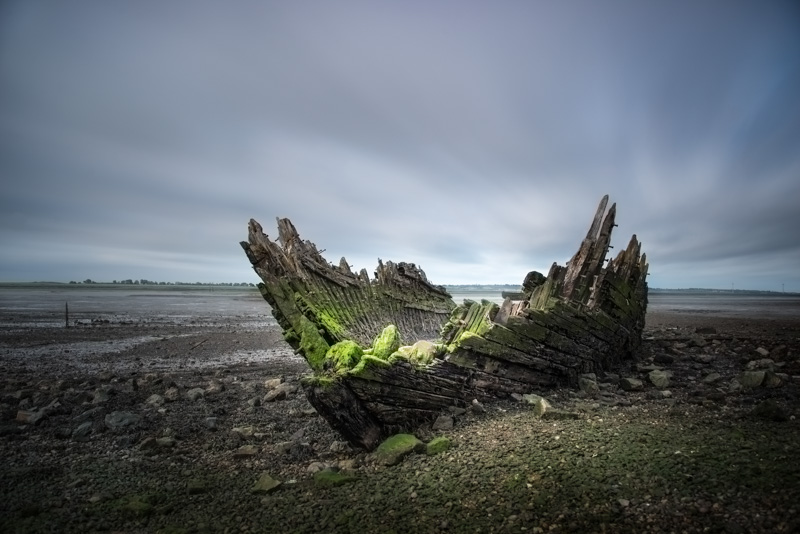 Some time ago I re-visited a well-known ship wreck near my house to photograph it at high-tide. I had been there a few times already and the first ever visit to the location – in spite of all my expectations – was most fruitful: the image taken as a test one gained some recognition and has been selling well ever since.

It was not the image I had in mind though, hence my further – rather inefficacious – visits there.

I was standing on the bank of the shallow strait with the tripod and camera in place, all filters on, ready to press the button of my remote control for a 2 minutes’ exposure when two men strolling along the bank approached me and started looking at the boat and my gear.

One of them said something about the boat and asked why kind of picture I was after. I replied that it will be long exposure, hopefully one I envisaged. We talked a while about the boat and the camera when he said that they both are also photographers and member of a local club. To which I said I give club-talks on long exposure photography so we might meet again in the future at their club.

As this junction the other man joined the conversation, asking where I was from.

Obviously, my accent betrays me but only to a certain extend – I am yet to meet someone who would – just from my accent – guessed correctly where I come from. Not that it matters to me a bit.

There we were, three of us, in front of an interesting historical artefact (the boat wreck) slowly decaying, wonderfully exposed to the elements, on a lovely sunny day with a tide at its peak, wonderful clouds in the blue sky plus not the shabbiest gear to photograph all this – and all this man could think of asking me was my country of origin. Of all the things we could have talked about, he chose to focus on the lest consequential of matters. I must admit his pronounced interest in the insignificant did take me aback a little. Cheeky fellow as I can on occasion be, in my reply I offered him my home for the past 20 years and said – West London.

They went their way. I shrugged my shoulders at this ignoramus and soon forgot all about this insightful conversation. Yet, his question wriggled its way back to me of late, more than a year later.

Why it did, I have no idea. It returned in a new form though, dressed into a question that – at least to me – might bear some significance.

Have you heard of gay literature? Or black or feminine one? If you go into any serious bookstore or library store you will find such shelves clearly indicated. To me, an avid reader, it has always been a most laughable thing, the dandiest thing you can expect in what is supposed to be a temple of literature. I am a very simple man and like to keep things simple – and as far as literature goes, my abilities end at recognizing only two types of literature – good and not up to scratch.

Without going into this black-and-white division any further, let me now turn to music. It is fairly easy to tell a Scottish song from Peruvian one for instance and a Polish tune from a Greek one. Just examples. If you look at architecture, it is easy to tell Muslim one from Chinese. The same goes for traditional clothes, ornaments on dishes etc. Local content always manifests itself.

Does the cultural accent can also be recognised in photography? When you look at Eugène Atget’s work does his photograph strike you as distinctively French or at least Parisian? Are images by Candida Höfer German? Or Rathika Ramasamy pictures – are they Hindu? Pentti Sammallahti photographs beautiful landscapes of Finland but are his images recognizably Finnish? Does anything like it exist at all? Our nationality, culture, background – does any of it transpires and surfaces in our work? Are my images Polish or British?

This may well be treated as an unimportant or even wrong question, a question without any answer. Nonetheless, I believe that a photographer should ask him/herself this question – and seek the answer, though I do not believe a straight answer exist.

What I suspect is that it is possible to arrive at the point where one’s photography is exactly this – my photography, your photography, his, her photography. Distinctively, as the thick lines betray Picasso and floppy clocks give away Dali’s hand.

Perhaps this is where ‘fine art’ begins to enter one’s work – with techniques of camera use and post-processing already mastered and where the photographers ‘voice’ is able to surface and present itself in his/her images. If that be so, ‘fine art’ would perhaps mean careful navigating the fine line between acquiring a style and being able to find joy and amusement in one’s work, between presenting oneself to the world as a finite – and therefore dead already – artist and one who steel finds inspirations which surprise him or her. Remaining incomplete and therefore still able to seek development and ebullience in one’s work. Mona Lisa smile – this mysterious expression might be read as precisely this – even the most accomplished piece of art is only a part of a journey.

A quick note to the man who asked this un/fortunate question: I am sorry that in my mind I called you a nincompoop and a dolt and am happy you did not hear that. Thank you for triggering those thoughts in me and making me venture into what – without your dunderheaded question – I might never have.