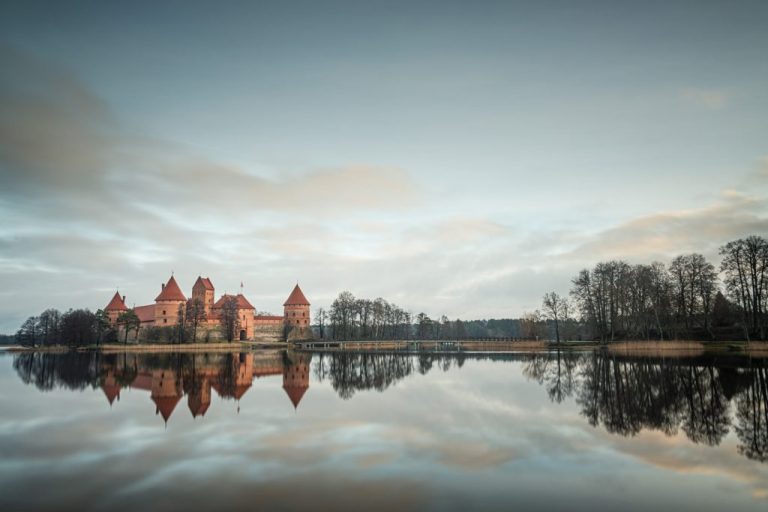 While recently in Lithuania, I took two mornings to go to nearby town of Trakai, something I have been planning since last year when I visited the country for the second time in my life a year ago.

This year it was my third visit to Vilnius. The first was just for one day, when Lithuania still suffered under the heavy boot of Soviet Union friendship. The city showed signs of past greatness but most of the buildings were run-down and boarded up. People in the streets seemed to be constantly in the rush and so preoccupied with the matters of their daily life that it seemed to me they were some king of grey ghosts, gone as soon as they appeared, without a care in what I considered to be still prepossessing buildings. That trip left in me mixed feelings and I thought of beauty lost in depravation.

I took that feeling with me to Vilnius last year. It did not take long for the city to turn my mind and see it for what it now is – a happy place full of young people strolling the streets and populating endless pubs. All the buildings in the old town are well taken care of now and – small as it is – the city leaves a very different mark now on a visitor. If you add to it the fact that Lithuania cuisine is beyond scrumptious and their beers leave nothing to be desired, I guess the picture of a nice time spent there is almost complete.

Granted, last year the weather was a bit cruel – there was snow and mercury in thermometer kept its level at minus thirteen almost all the time. I did not have time to leave the city so, hoping I will be coming back, I made sure next time I do not need a map to navigate its streets.

This year weather conditions were entirely different. It was pouring all though the week, with clouds hanging heavily over Vilnius, which I like to call the city of churches as literally every two hundred meters there is a church there, at least in the old town area.

Apart from those taken while visiting Užupis (a neighbourhood in Vilnius, largely located in Vilnius’ old town, a UNESCO World Heritage Site – let us leave this for some other time perhaps) I did not take many pictures of Vilnius and was hoping that at least at weekend the clouds will clear and the weather will improve enough to justify venturing out of the city and into Trakai.

Trakai is a small town located about 30 km west of Vilnius. Part of the Trakai Historical National Park, Trakai Island Castle is a 14th-century fortress in the middle of Lake Galvė. Once a home to Lithuania’s grand dukes, it now houses the Trakai History Museum, with archaeological objects, coins and crafts. This castle was the reason for my trip there.

Together with my Lithuanian friend we left Vilnius at around 7am and arrived at the parking spot in front of the lake in Trakai 30 minutes later. It was drizzling and it was still too dark to see the castle but I guessed it should be more-less where the illuminated sign TRAKAI 2020 was, far in the distance with its reflection creating some sort of a small carpet which, in complete darkness that surrounded us, seemed to float on the water.

Unbothered by the rain we left the car, crossed the street and made our way towards the lake. There, still in the darkness, we put up the tripods and took a few pictures of the sign. After a few minutes we were able to distinguish trees just behind it and from that moment there amount of light in the air grew steadily – and little by little the miracle of the morning unravelled before us. There it was, a few hundred meters ahead of us, the castle on the small island, still a dark blob but we could already clearly make the turrets and watchtowers from the sky.

It took further 30 minutes for the darkness to disappear completely and there we were – standing in a drizzle and trying to get something to show for the trip. We made for the island, crossed a wooden bridge and walked around the castle. It is not a big place, in fact it stroke me as rather small – perhaps because I knew it was the place from which the largest country in medieval Europe was ruled. One would expect something much larger and more splendorous. Especially knowing that the vowed enemy of the fledging Lithuanian state in those times was mighty Teutonic Order with its formidable stronghold in Malbork.

Finally, drenched in rain, we decided to call it a day and return to Vilnius where, once we have changed into dry clothes, we could spend the rest of the rainy day on tasting palatable propositions of Lithuanian cooks and spend the evening in my favourite beer cellar there. I did not think we would go to Trakai as my friend had some plans for the next day already.

As it turned out, I was wrong. Next morning we left for Trakai at more-less the same time and arrived by the lake before sunrise. The sky was full of clouds but it was not raining. Hungry for some decent shots of the castle we walked by the lake in search of the best vantage point. Of course the castle has been shoot to death and I had a good look online at images there even before getting on the plane in London so I knew what I was after. Tripods set up, cameras at the read, filters slotted in – all ready we looked anxiously at the sky in search of clearing in the clouds and some sunshine. It was still before sunrise, wind was gently ruffling the surface, there was nobody but us there.

Suddenly the sun shone behind us, just above colourful village houses and the light touched the gate of the castle. ‘This is it. This is what we came here for’ I said. In a fraction of a second what previously had been a little more than a flat silhouette quickly gained form and prominence and form and became a body of the castle. The sun was low and shore through the trees that grow on a peninsula in front of the castle so the light touching the wall was not harsh. We shot away and bracketed exposures of 20-30 second each – enough to smoothen the water in the lake but still short enough not to lose the shape of trees and reeds and keep clouds, which meanwhile parted, in almost natural condition.

What we saw before us was very beautiful indeed. What appeared at the back of the cameras was very promising too. We looked in the sky and saw that clouds were gathering again so decided to take a stroll around the caste again and move on. We drove around the lake and found ourselves on the other side of it, sadly too distant from the castle to make pictures of it any good. The could covered the whole of the sky so we just had a nice stroll along the lake and finally decided to head back to Vilnius.

I do not like to work on my images on a small screen so only saw the raw files on the screen next day when I reached home. Granted, it is not a very long long exposure but to me it presents the place as I saw it, with the clear reflection in the water and the right luminosity we had there. In fact, I am so pleased with this image it was immediately printed and framed and added to the little gallery in my office. I am very much looking forward to visiting the place again in September when the trees will hopefully carry all the gorgeous colours of autumn. 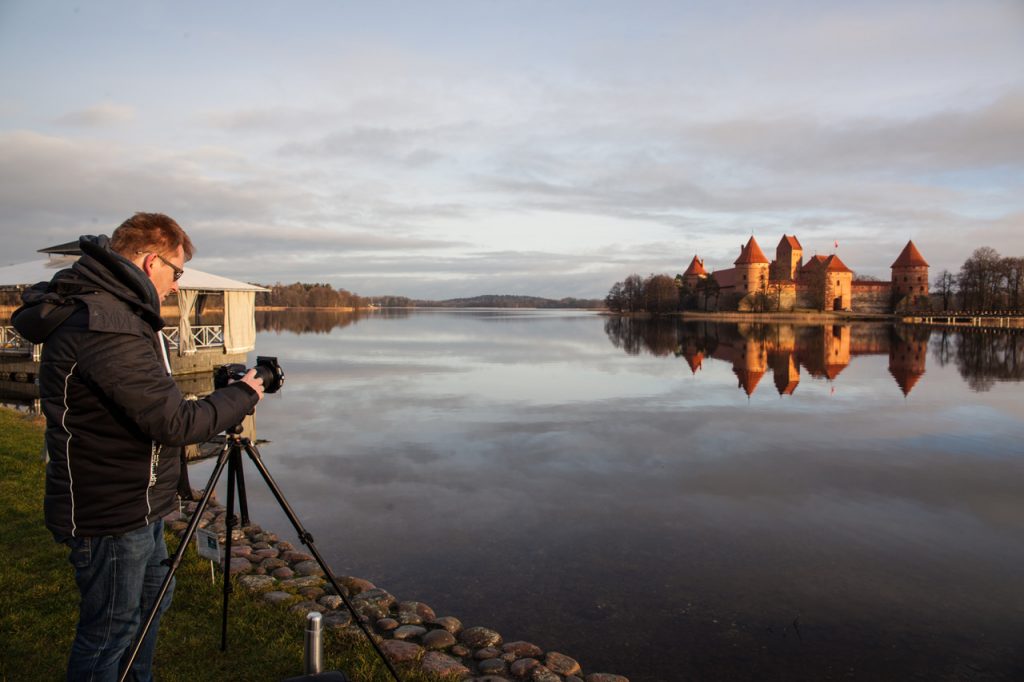